My how time flies. Once again this past year has been very busy, so busy that the frequent updates I promised last summer fell by the wayside. In any case, there is lots of ground to cover so let's get started.

Atlantic 70-F
Nearing completion at Goetz Composites in Bristol, Rhode Island this super lightweight- super slippery hulled, all pre-preg-oven-cured carbon fiber Atlantic Cat is quite different than her sisters in that she sports a freestanding carbon rotating mast in each hull. This side by side rig configuration has been used before in cats but not very often. Selected for ease of shorthanded sailing it should be very fast directly upwind and downwind which are typically the weaker points in catamaran sailing performance. The spectacular 100' long spars were constructed by Southern Spars in Auckland and shipped to Rhode Island.

In May the A70 was pulled out of the shop to be turned upright providing quite a photo op. The builders prefer to build as much as they can upside down since dust and debris falls out of the boat and you can work standing on a flat floor. But eventually the hulls need to be rotated and this required cranes to do the job. Currently the deck is attached, most of the interior in place and systems/machinery are being installed. Launch is expected later this year. 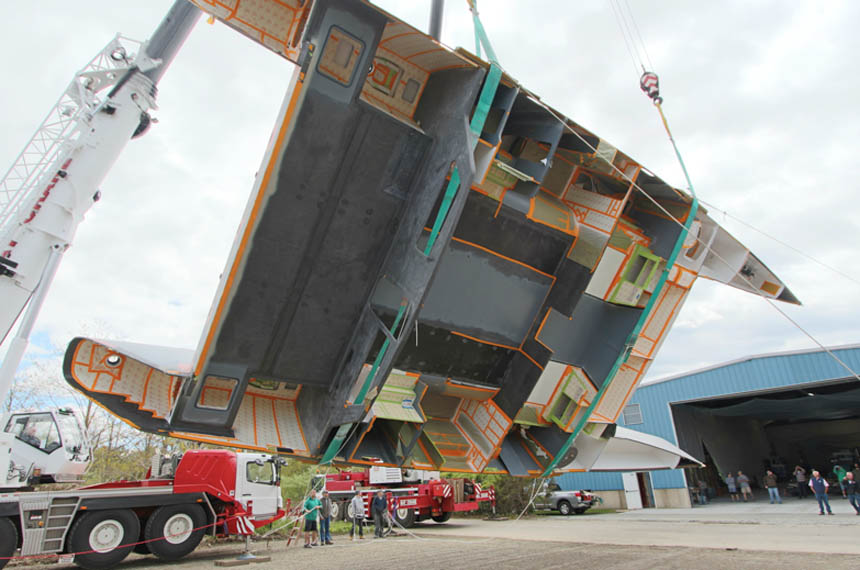 Atlantic 72
Building across the street from the A70 is the Atlantic 72 at Aquidneck Custom Composites. This new design is also an all carbon boat but somewhat more conventional in nature. Her use will be cruising with friends and family and occasional charter. Consequently the interior was designed to accommodate 8 guests plus 3 crew. More creature comforts are allowed for as well as larger engines and tankage.

The sailplan is similar to her smaller Atlantic 57 cousins but with a few changes. Over time I have become less a fan of large roached mainsails. The leech conflicts with a permanent backstay so the shroud chainplates must be moved aft to support the mast without a backstay. The result is that the main sheet can seldom be eased as much as needed before the batten pockets self destruct by rubbing on the shrouds. In addition jib luff sag is harder to control without a backstay. The A72's sailplan was altered to allow the mainsail to clear a fixed backstay and the shroud chainplates moved forward so that the mainsail can be effective on a deep reach. The genoa and self tacking staysail were both made proportionately larger since headstay sag can be controlled with the backstay. Between the stiff all carbon structure and new rigging modifications I think the A72 will sail upwind extremely well. The carbon spars are building now at Offshore Spars in Michigan. 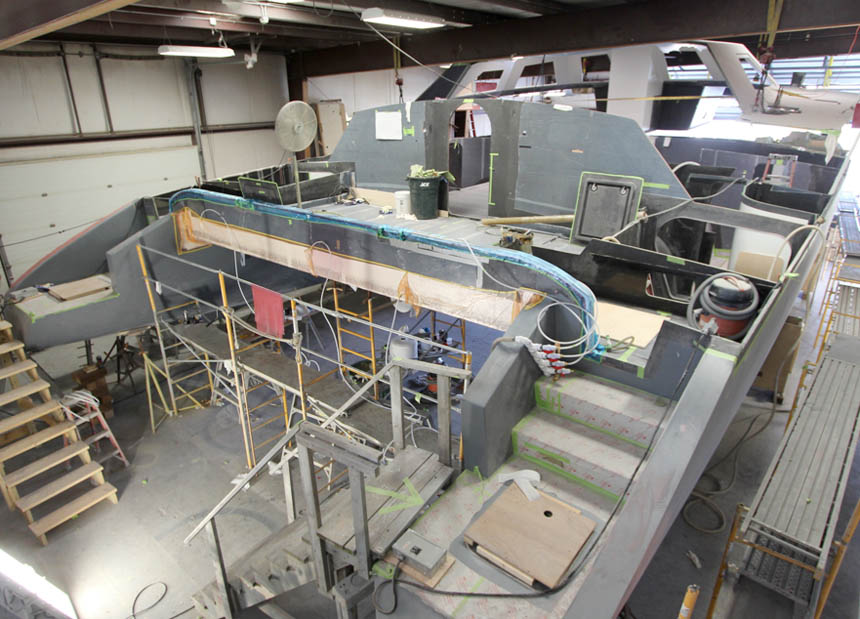 A47 MastFoil, now the A49MF
Alwoplast in Valdivia, Chile has been busy churning out A47 Mastfoil cats for several years. After launching 8 of the A47's the mold was extended to 49' to allow more deck space aft as well as more displacement for a solar panel covered hardtop over the aft deck. The interior configuration has evolved differently for different owners so that no two are identical. Now with the additional length aft some new possibilities open up for arrangement of the port aft cabin.

In combination the A47-MF design now has well over 50,000 sailing miles and everything seems to be working just fine. At least two current owners love them enough to have ordered second MF designs. And delivery skipper Dale Norley, who has more miles sailing the A47MF than anyone still can't get enough of it.

MF40
At long last the MF40 was splashed last December in Florida. Beautifully built hulls in strip cedar core with carbon and s-glass skins by Joest Boats she is a complete yet simple cruising cat. Emphasis is on easy single handed sailing and accommodations for a couple with occasional guests. Owner plans extensive Bahamas cruising in 2018. 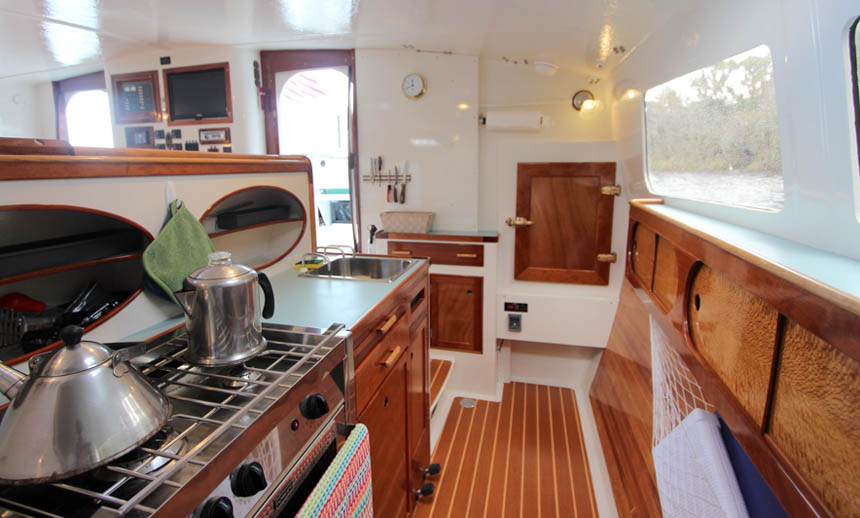 Spindrift 14M
Calbuco the first Spindrift waterjet powered, hydrofoil supported, cat arrived in the USA in June 2017. Based in Annapolis after running her up the coast from Miami, the owner has made a couple summer cruises to New England.

Quote from owner: “My family really enjoyed the New Enland trip. 1,342 nm in 22 days, Maine was by far the highlight. We love the boat, and I'm sorry to say that the rest of the family probably prefers Calbuco over Patagao (previous sailing cat). Not that they don't enjoy sailing, but the certainty of timing and the once unthinkable distances or last minute side trips are now possible, with a full night sleep. Plus, its a great day boat easily single handed. I am still amazed with the ride (both comfort and speed) for a boat this size.

When we were in the C&D canal, I gave Ann and the kids the option....2 more hours to home (Annapolis) or one last night on the hook in the Sassafras. They all chose the Sassafras. That said it all for me.

“For what it's worth, both the local and regional Hamilton Jet reps who have experienced the boat, are very impressed. They deal mostly with Hinckleys and police/military boats. They say the Hinckleys maneuver just as well at low speeds but our boat is superior at speed (speed, tracking, sea keeping, efficiency etc.) ... And of course, no other boat in this size range has the same space. They were both fairly effusive about how cool the boat is. That seems to be the same response from all others as well… especially from people who know something about boats.”

Leopard Still Lives
As was reported in the sailing press last November, the beautiful A57 cat, Leopard, was capsized at night by a tornado while en-route to the Caribbean. Fortunately the crew was picked up by merchant ship after about 10 hours and suffered only bumps and bruises from the ordeal.

Efforts to locate Leopard in the days afterward failed and she was presumed lost. Until 5 months later when she was sighted by a ship north of the Bahamas. She eventually drifted close to Beaufort, NC where she was found, towed in and righted. Being very interested in her condition I went to see her a few days after she was hauled out. Her structure was absolutely fine. All the large pilothouse windows were still in place. Even a fair portion of the interior woodwork was still in good condition. REMARKBLE! And a testament to her superb construction.

Putting Leopard back into sailing condition is a very worthy project. Chris White Designs currently owns Leopard and she is for sale, if you have interest contact me for additional information.

Cats Ready To Go
There are several cats listed for sale on the CWD brokerage page (which links to our YachtWorld site) and any of these would enable a jump start on a world cruise.

Two cats in particular are located in the Pacific Northwest where the cruising is first class. Puget Sound with the San Juan Islands near at hand, Vancouver Island, the coast of BC and up the inside passage to Alaska. Wow! I can't imagine a better place to have fun with a new boat.

When you're done with cool weather and want some warmth it is all down wind to Mexico. Join the Baja HaHa race in late October and have a fun sail south while kicking butt in one of the fastest boats in the fleet.

Barracuda-X
Lovingly looked after, practically new, launched 2014. Barracuda-X sailed north from Chile to her home waters of Vancouver Island. She's extensively explored that region up to an including Alaska. Potting shrimp in the anchorage while watching moose graze and bald eagles soar! A cruising experience most will never see. The owners like the experience of building with Alwoplast so much they commissioned a second Atlantic Cat.

YouNevaKnow
Why?-because you won't know. And that's all the more reason to do the things you want to do before you are no longer able. The Atlantic 48, YouNevaKnow, was launched in Cape Town, S. Africa in 2010 and has cruised extensively since. She came across the South Atlantic to the Caribbean, then across the Atlantic to the Med where she spent a year. Following that it was back to the Caribbean, through the Panama Canal and out to French Polynesia where she was until recently, then returning to the USA via Hawaii. I had a very close look at her two weeks ago and she looks almost new. Not a stress crack anywhere in hull, decks or bulkheads. Carbon mast and boom. Daggerboards. All maintenance has been done and she is ready to go- just add groceries. 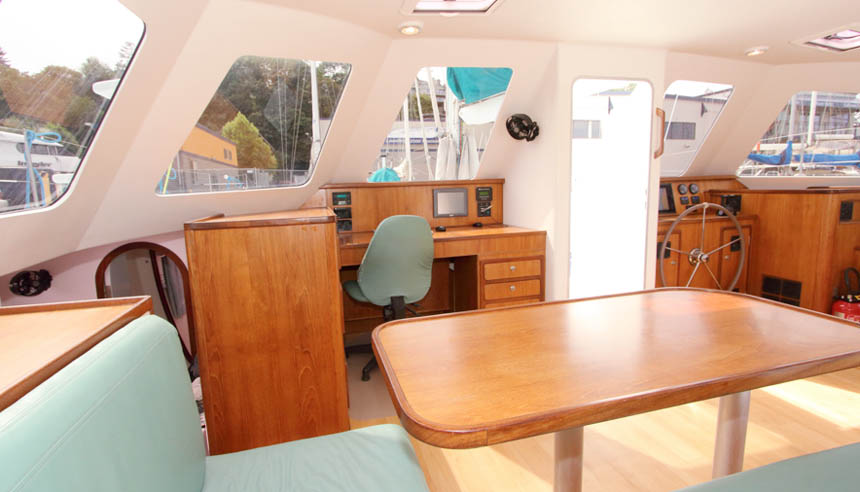 Segue
This Atlantic 55 finished a circumnavigation early in 2017 and has just completed a refit in Trinidad. Hulls and decks have new AwlGrip polyurethane paint, rig completely dismantled inspected and parts replaced. New sails. Engines new in 2014, with low hours. Lots of extras and ready to go back to French Poly. 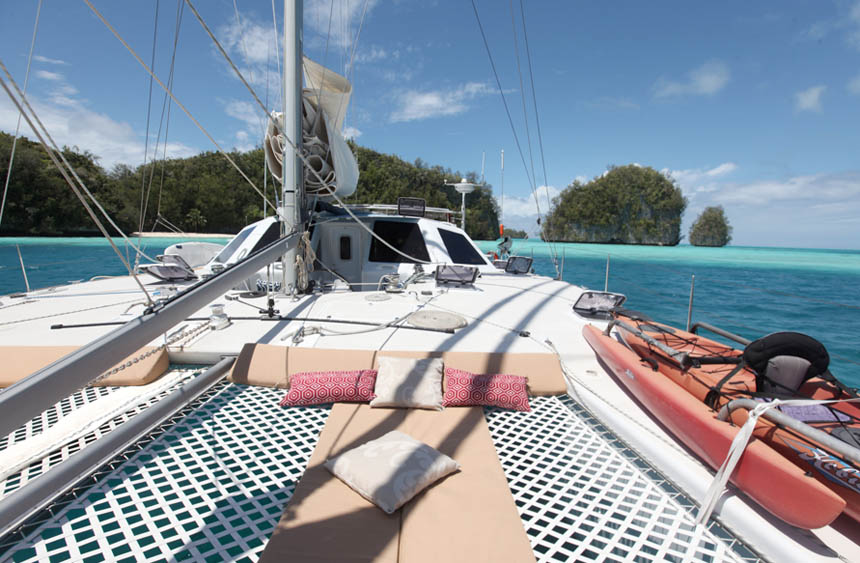 Boundless
Just listed for sale this week Boundless is a fine example of the Atlantic 57. Built by Alwoplast using an increased amount of carbon fiber to save weight she recently had a major refit in the USA by Aquidneck Custom Composites. All new and flawless exterior AwlGrip on hulls and decks, new upholstery and updated equipment. She is a beauty and should be seen.