- Henk de Velde is a Dutch seafarer. He spent 13 years in the Dutch merchant navy, and was the youngest individual to be made Captain in that service. Henk is especially known for his long solo voyages around the world. In 2007 he embarked on his 6th circumnavigation aboard 'Juniper'.

One of the most commonly heard but absolutely wrong conclusions is, "when the weather gets that bad, I lower all sails, lie down in my bunk and read a book". This kind of comment is coming from people who do not know what is bad weather but have read survival books that say how to survive the worst is by laying a-hull (heaved to) - not to be confused with "bare poles".

Usually I do not heave to with a multihull; I try to keep her going. But during the double ocean crossing from Argentina to Australia (Atlantic and Indian Ocean in the lower roaring forties), I came to a time I could not handle the fourth reef in 55+ knots of wind and I had to leave Juniper to the mercy of the seas. She handled great. Maybe because of her two rotating (wing-like shape) masts she rode the seas on 45-50 degrees angle - even going to windward at 0.5 knots.

I am on my 6th circumnavigation, 5 times with multihulls, 3 times Cape Horn, 2 times non-stop, 1 time with 1 stop. Of course when sailing a lot you meet bad weather. Of course when sailing long distances you meet bad weather. Bad weather, meaning strong winds, can be during low pressure storms, which take usually not longer than 3 days, with the strongest wind for 6 to max 12 hours during the front passage. Beware the trough behind a front.

During a frontal passage you can encounter gusts or squalls far exceeding the storm wind force. But also during tropical passages and in doldrum kind of weather, with high clouds like high cumulus clouds you may encounter very strong squalls. 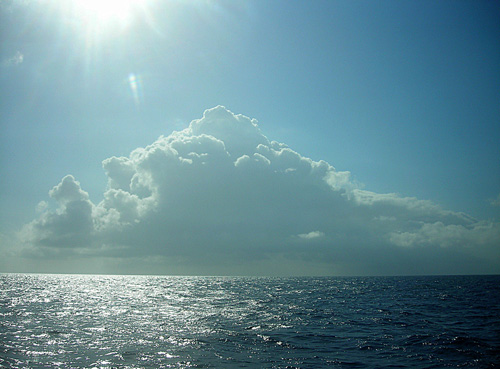 In my lifelong of sailing I have experienced one capsize. The boat was a 60 ft racing cat (model 80’s). We were with 4 on board. We were hand steering. The weather was bad but not that bad, no more than 40 knots of wind. The seas were not too high as we were in more or less sheltered water (the English Channel), although they were short and steep. We were reefed. I was inside updating the navigation when I came outside because I heard a scream. Standing in the cockpit I felt the boat lifting her hull and slowly going over. We were in the water but climbed back on board. We were saved by a British rescue helicopter.

Afterwards: The helmsman told me - he saw the steep wave coming and luffed up. Afterwards: I was thinking, that steep wave stopped the boat when luffing too sharp (too much) and started to lift the hull. Once lifting the hull, the bridge deck became exposed to windage. Also, when listed more than 45 degrees, the weight of the heavy 80ft mast (1000 kilo/2000 lbs including rigging) started to act as well.

A year later I sailed that same boat with one stop around the world. 5 days before the Horn I had the worst weather ever and was thinking all the time - if she goes then she should go now ... but the boat managed very well!

Another completely different story; sailing our 46 ft Wharram cat across the Indian ocean from Christmas Island to Durban, we encountered cyclone Oscar, with 100 knots of wind. With all sails down I sailed (hand steered) the boat for 44 hours, averaging 10 knots.

Reefing is the only answer, even when you are sometimes underpowered, especially when you are short handed. Multihulls are almost never underpowered because when sailing slow you will still make the same speed as a monohull.

Being most of the times on autopilot, I look and listen to the pilot; when it has difficulties to handle the boat, I reef!

And how do you handle gusts of wind sailing close hauled or reaching?

Sailing single or shorthanded going to windward I reduce sail more than on a reaching course, because of the forces in sails and rigging and pounding movement of the boat.

Beam reaching can be the most dangerous and tricky because you are in the middle of two decisions: luffing or bearing away.

Anytime reaching in gusting weather I bear away… I would bear away and sailing by autopilot I would take in another reef.

Always remember; no one is invincible, nor is a boat!

But most of the time, don't blame the boat!

I always turn off the autopilot when a squall hits the boat and the wind begins to build. There are lots of squalls that are benign and build only a small increase in wind along with the rain but I am always ready to disengage the autopilot if the wind increases more than 5 knots. We all make mistakes and only luck keeps the mistakes from becoming tragedies but there are some lessons to be learned from Anna's capsize.

1) Hand steer when things get dangerous.
2) Squalls and waves and can be dangerous so don't get complacent just because the last 10 squalls arrived and stole all your wind.
3) If you are close hauled and a squall hits with rapidly building wind then turn up and drop the main. If you are reaching, then turn dead downwind and roll up the jib. I have survived 50+ knots by turning downwind. At that wind speed and the boat doing a solid 22 knots and we didn't feel out of control nor did we think there was any danger of the boat pitch polling. I have been able to put in a couple of reefs when going downwind but it is difficult. You have to winch the reef line in in order to keep the sail from hanging on the spreaders. Maybe everyone should try doing it before they are in a storm.

I find that downwind in squally conditions a very deeply reefed main and a large light sail forward that can be completely eased off in an instant makes me more comfortable. Sails behind the mast are difficult to handle and impossible to depower quickly with the apparent wind aft of the beam.

For what it is worth we had a scary gust encounter at a similar latitude in the same pond. Sailing from Raratonga to Tahiti we hooked into a slow moving front because it promised to kill the trades which normally make that passage a difficult beat. The front turned out to be slower moving than forecast and we overtook it shortly after departing Raratonga. It came with overcast and isolated rain but generally light winds and not much pressure from the squalls. We had on the genoa (about 115%) and a reefed main and were very underpowered in the lulls and somewhat underpowered in the gusts and after a day became a bit bored and complacent. Which is when a squall that looked just like all the others, not particularly wet, fast moving or white cappy, dumped a huge gust on us. I haven't any idea what the wind speed was reading but I released the jib sheet, main sheet and jib halyard (we had hanked on jibs at that point) before M could get from the pilot house to the cockpit and we were flying along under just that bit of main that was drawing. The world was just one huge screaming mess of wind and spray. I blew the main halyard off and M and I pulled the main down the mast which was a chore. Then we got the boards up and the motor on but the wind was past.

For the rest of the trip we motor sailed with the jib under the same front and never saw any significant wind out of it. That suited us just fine as we were pretty shaken. Tom Burgess, A48 'Zen'

As you know, we sailed Zen in the exact region of Anna capsize last year. We sailed through 2 days of 40+kt winds and 25 to 35 foot constant seas. During one 8 hour period we had consistent 50+kt winds as we passed through the edge of the approaching front. Based on significant weather data we were prepared well in advance for the conditions. Zen handled the weather wonderfully and, thanks to the pilot house, we all stayed dry and warm throughout the two days. By the way...during the 8 hour period of higher winds we hand steered the entire time. It was critical to manage the constant course changes for wind and wave angles. We ranged from 3 reefs in the main and a significant roll in the jib to just the triple reefed main or, in the worst of it, only a small slice of jib and no main.

One last comment...there were at least three 45'+- monohulls within 25 miles of us during that storm. They all stopped sailing and went into survival mode (one boat nearly lost their rig and was disabled for the remaining 500 miles to NZ) while we were comfortable and actively sailed through the weather and reduced our exposure compared to those that drifted within the poor conditions.