The Atlantic 50 was first of the Atlantic Cat series catamarans, and the first cat from any designer to feature the pilot house/forward cockit configuration that has become so popular. The A50 was designed in 1983 and launched in 1985, built as a one off at a small shop on Cape Cod, Massachusetts. 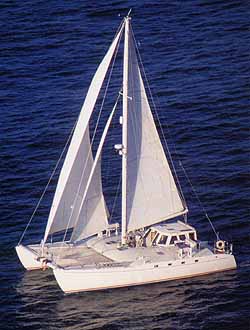 This boat sailed for many years with the name 'Arabella' and made yearly trips between Martha's Vinyard, MA to Exuma, Bahamas. She also operated as a day charter boat, taking small groups from Menemsha to Cuttyhunk.

The Atlantic 50 design is not available, having been supersceded by other improved designs.