Frank Middleton, owner of A57 Nogal, is circumnavigating with his family and friends. Here's what he had to say about their Atlantic crossing:
"By the way, the boat handled like a dream on Atlantic Crossing (Canaries to Caicos) - 3700 miles in 17 days, in spite of the fact that we blew out the A3 after 8 days and stopped to catch a ton of fish along the way. We hand steered the entire trip and never handed the wheel over - my crew literally fought for time on the wheel the entire way - averaging 9-11 and surfing at 20...What a boat!"

Those three words were used in the very first advertisement for an Atlantic Catamaran in 1985. It is what I believed sailors wanted then and what I believe they want today. In the 30 years since there's been steady progress in making all of the Atlantic Cats faster, safer and more comfortable. As a group, they are now recognized in far flung cruising harbors all over the world as “the” cruising cats of choice.

While other catamaran designs are packed with trendy features and try to appeal to people looking for the sizzle rather than the steak, we put a perfect steak on the platter and hand you a sharp knife.

The Atlantic 57 is a refinement of the proven Atlantic 55. While the interior layouts of the A55 and A57 are nearly identical, there are a variety of changes that improve the already fantastic performance of the Atlantic 55.

Adding a little hull length is almost always a benefit to a catamaran, and in the case of the A57 the additional length also allowed a slight increase in the fore triangle area. Adding sail area to the staysail helped to fill the gap in wind range between the small self tacking jib and the larger genoa.

Another interesting modification was the change to asymmetrical daggerboards. The A55s used either swing up centerboards or symmetrical daggers. Both worked well, but it seemed that windward performance could be ratcheted up from excellent to spectacular by using a daggerboard that created extra lift. The result is evident when sailing the A57 to windward as she makes no noticeable leeway. 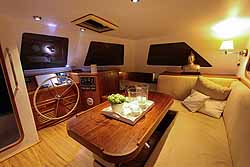 There are numerous small changes in the interior accommodation. Refrigeration space was increased, lockers in the sleeping cabins were enlarged, access was improved into the forepeaks and the interior lighting plan refined. A significant alteration was made to the aft deck area - the deck level was lowered, which allows fixed seating along the forward side and a deeper bulwark along the aft side.

Additionally, the A57s are lighter due to refinements in construction techniques and materials, and changes in installed equipment. The A57s are coming in about 1500 lbs lighter than the A55s, which translates into several percent more boat speed under sail.

Diesel propulsion is provided by twin 55 HP engines coupled to saildrives and three blade folding props. The A57 can go nearly 11 knots at full power and has fantastic fuel economy cruising at 8 kts.

While aluminum spars can be used, all of the A57s thus far are equipped with carbon fiber masts. While the cost is higher than metal spars, there are benefits to a carbon mast.  It is lighter weight than aluminum and often is quite a bit stiffer, which reduces the need for precise rig tuning. The Atlantic cats with carbon rigs do feel different sailing through waves, and in most conditions it is an improvement.

The actual construction process of building an A57 is every bit as important as the design. Without proper execution, the greatest catamaran design in the world will be just one more ordinary boat.

The Atlantic 57 is currently built by Alwoplast, SA, with vacuum bagged glass and carbon fiber using 100% epoxy resin and foam cores. There have also been several A57’s built in the USA by Aquidneck Custom Composites. Both of these builders exercise great care in making sure that the epoxy composite structure is properly fabricated and the designed weights are maintained. Just as important, their business models keep overhead costs low and allow for the expenditure of many thousands of man hours devoted to careful fairing and painting of interior hull, deck and bulkheads rather than the quick and heavy “cover up and hide” process commonly employed by the large manufacturers. The added care and quality control is immediately evident. Check out the photos, or better yet arrange for a visit. 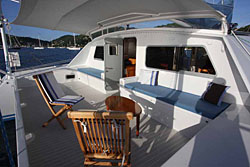 Many cruising sailors think that a 57’ cat is too large a boat for a small crew to handle.  I disagree. In common with all the Atlantic cats, the A57 is set up precisely for shorthanded and singlehanded sailing. It takes essentially the same number of lines located in the same places to sail the A57 as it takes to sail an A42. In fact, it's actually easier to tack the A57 than the A42 because of the self tacking jib on the larger cats. Just turn the wheel and it's done. Or if you're really lazy like me, just push the tack button of the autopilot remote control!

There are certainly differences between sailing a 42’ and a 57’ cat, the main one being that you need to follow the correct procedures for sail handling on the larger boat. On a smaller boat someone’s  physical strength can overcome sloppy seamanship.  But there are limits to what one person can muscle around. When sailing a cat like the A57 alone or with just one crew you need to let the boat do the work by guiding her carefully and pulling the strings in the correct sequence. This is not difficult to learn and is just part of the natural process of getting to know your boat.

In summary, if you are looking for a high performance cruising cat that is big- but not too big- you've just found it. Performance of the Atlantic 57 under sail is far superior to any of the cats made by production builders. The Atlantic 57 has also demonstrated equal performance to significantly more expensive one-off catamarans such as the Gunboat 66.

While stellar sailing performance is important and highly sought after, it is only half the story. Safety, durability, comfort underway and at anchor matter every bit as much to the cruising sailor. The Atlantic 57 excels on all counts.