The all new Atlantic 70F (free-standing rig) is an ultra fast and easy to handle 'couples' cruiser. Her owners are very experienced sailors; they circumnavigated in the early 1980s, recently owned an Atlantic 55, and are competitive racers at their yacht club. The A70F is long, lean and light, built in all pre-preg carbon fiber. With the owners' tremendous sailing experience comes specific requirements, bold ideas for the rig and other aspects of the project, and extensive involvement with the design and construction.

This innovative design is being built in Rhode Island.

Launch is scheduled for early spring 2018.

The most exciting and nerve wracking days in my work life are the ones when a unique design leaves the dock for her first sail. The most recent of these was the on the all new Atlantic 70 with freestanding masts.

In one word, WOW!

While there are always some glitches and bugs to be worked out on shakedown sails, especially for an entirely new design with an unusual rig, our first sail in Narragansett Bay was exciting and gratifying, and demonstrated Saphira’s speed and ease of handling. Just what her new owners wanted to see!

This design has long been in the works. In 2011 owner Peter Francis outlined his desire to construct a fast and easy to handle cruising cat for himself and his wife Jennifer to sail long distances. Peter was intrigued with the concept of using a freestanding mast in a cat, thinking it could be both easy to handle and safe since the sheet can be eased to quickly depower on any point of sail. He also hoped that a rig with freestanding masts would be very reliable because of the limited number of key components to fail.

I’m well aware of the advantages and disadvantages of freestanding masts; I built my 50’ trimaran Juniper in 1980, and rigged her with two freestanding masts. In the case of the budget- built Juniper, her hollow Douglas Fir masts were not stiff enough to match the stability of the boat. Consequently, when the wind increased, mast bend was excessive and the sail shape would go to hell. However, 35 years later, carbon fiber is much less expensive, and the techniques to design and build freestanding masts have advanced considerably. A freestanding rig can now be a viable solution for a modern cruising cat.

The main issue using a freestanding mast in a cat is where to put it. The mast needs tremendous support at the lower end and most cruising cats would not have the structure to support the mast if it were placed on center line.

A solution is to put one mast in each hull. This concept has been tried before, the 120' monster ‘Team Phillips’ being a notable example, as well as a handful of cruising cats.

To try to make better sense of the pros and cons before embarking on a full blown design/construct project Peter found two Stiletto 23' beach cats for sale. He rigged one with two masts fore and aft on center line and sailed that against the identical cat with the original conventional rig.

After weeks of ‘match racing’, the fore and aft rig was changed to a freestanding side by side, bi-plane configuration and again sailed against the conventional rig. Considerable performance data was collected during this process and ultimately Peter decided that the bi-plane rig offered the advantages he was looking for.

July 2014 marked the start of detailed discussions about the design for a large cruising cat, utilizing what was learned from the Stiletto cat experiments for the rig concept. The design parameters were for a two person cruising cat with easy 300 mile per day capability. Accommodation was to be optimized for a crew of two with occasional guests. Rigorous weight control in design, construction and equipment was a top priority in order to meet the performance targets.

The design process involved many people, each of whom contributed their specific areas of expertise. SDK did the bulk of the structural engineering. Robbie Doyle had a lot of input on the sail plan. The design of the masts was central to the project, and Southern Spars New Zealand applied their considerable engineering experience to the rig. And Peter and Jen Francis, with their extensive cruising experience in both monohulls and cats, oversaw every detail of design and construction with an eye to both ease of handling and ease of maintenance. My job was to wrap up the package in a pleasing shape that would be both comfortable and safe in the ocean.

Boatbuilder Eric Goetz, an old friend of Peter's, built the boat at his shop in Bristol, Rhode Island in all pre-preg carbon composite. As is becoming more and more common, extensive 3D computer modeling was used to CNC cut and mill molds and parts. Large ovens were built to vacuum bag and cure the hulls and other large parts at the required 200 degrees F. This is not your grandfather's boatshop!

After an April launch in the thick of a late winter snow storm, “first sail day” arrived in late May, 2018. It was time to experience the results of so much hard work.

As I said before, WOW!

The wind was quite light but slowly increasing – good conditions for a first sail. By the time the sail was set and the luff and foot tensioned, the wind was hovering around 8 kts. With the engines off, and under only half her working sail area, Saphira sailed happily to windward at 5 kts or so. Steering and tacking seemed fine. So far so good! 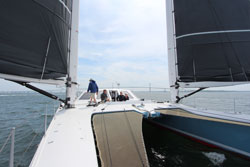 This sailplan does not incorporate any downwind sails. Instead, the masts are tall, and the fully hoisted mainsails are large, and are only to be used downwind an upwind in very light air. This means that the boat is intended to sail most of the time with one reef tied in.

After a little more time fussing around with various sailing controls, the port mainsail was hoisted to its working (single reef) position. By then the wind had built to about 12 kts. And with her full working sail, Saphira sailed very happily at 10 kts hard on the wind. Her narrow and light hulls made hardly a ripple in the water. On deck there was an almost eerie quiet without any rigging to whistle in the wind.

The wind instruments on the rotating masts had not yet been corrected for mast rotation so no definitive wind angles were displayed, but by eye and by compass our tacking angle looked very good.

Working our way toward the Newport bridge, the wind picked up a little more and Saphira started ticking off 12 and 13s on the GPS hard on the wind, with probably no more than 15 knots true wind speed.

Tacking is easy - just turn the wheel and push a button to rotate each mast from one tack to the other. All sail handling and reefing can be done from the security of the center cockpit. The completely unobstructed view forward from the cockpit is unique for a sailboat and provides great visibility.

Turning down wind the sheets are eased way off into a simple “barn doors” configuration with booms projecting outboard. Saphira again made spectacular speed in the light conditions. Sailing a dead run at 10 kts with an estimated 14 kts of wind is pretty impressive. And both sails were still single reefed!

All in all it was a spectacular first day out.
I can't wait to see her go in stronger winds and waves. Stay tuned.