I built my first trimaran, a Jim Brown designed Searunner 31, in 1973 and have been involved with multihull sailing, design and construction ever since. I worked with multihull designers Jim Brown and Dick Newick in the late 1970's on the SIB (Small is Beautiful) project.

My first large design was the 52' trimaran, Juniper, which I built in southern Virginia. Juniper was launched in 1981. I sailed her extensively for 25 years, cruising with my wife and family from Nova Scotia to the Caribbean. She was sold in 2006 to the renowned Dutch seafarer, Henk de Velde, who in 2007 embarked on a singlehanded round the world voyage. 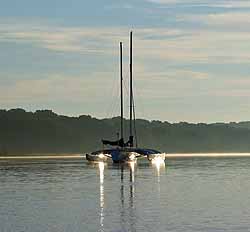 I started my yacht design business in 1983 after I returned from a two year cruise on Juniper. Shortly thereafter, I developed forward cockpit - pilot house concept for catamarans. The first of these 'Atlantic Cats' was launched in 1985. The innovative forward cockpit concept of the Atlantic Cats sparked lots of interest right from the start, and has grown steadily in popularity. Many Atlantic Cat owners regularly complete long ocean passages with small crews, and often remark on the comfort with which they are able to do so. The Atlantic Cats in production as of 2016 are the A57 and the A47MastFoil. Some of the other designs are available on a custom basis.

In 2011 I developed the new MastFoil rig (patents granted 2014 and 2015). The intent was to develop an easy to handle and safe sail plan without sacrificing performance. Two designs are currently being built with a MastFoil rig, the A47, and the MastFoil 41. 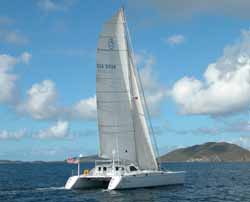 In addition to the Atlantic Cats, I've designed other catamarans with aft cockpit layouts, as well as a series of powerful, fast trimarans. As of 2016, there were approximately 80 cruising size CWD boats sailing the world over.

My book, The Cruising Multihull, was first published in 1990, and is still in print.

I divide my time between my current boat, Javelin, an Atlantic 55, on which I've logged about 30,000 miles, and South Dartmouth, MA.