“Awesome, right out of the box!”
Ben Hall

Yesterday I had a chance to get onboard the new Discovery 21 for a trial sail along with her builder Bill Koffler, and mast builder as well as champion sailor, Ben Hall. The boat was moored in Bristol, Rhode Island, and the day was calm to start with a perfect Indian summer sea breeze building in the afternoon. 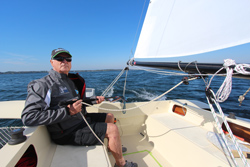 As we dropped the mooring “Ishtar” slid off on starboard tack in the first puffs of afternoon breeze, easily sailing at wind speed. We tacked out through the moorings, quickly coming across in the tacks with main, jib and mast trim all self-tending.

The helm was nicely balanced with just a slight bit of weather helm. Windward performance seemed excellent although we had no instruments on board and no fast boats to compare with but the way the shoreline moved past was impressive.

As we got out toward the Mt. Hope bridge the wind started building and the little trimaran's engines began to rev. With wind in the low teens boat speed was quickly over 10 knots. Going upwind at speed the cockpit was still remarkably dry. 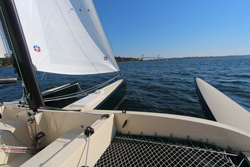 Tacking over to the more open part of Narragansett Bay the wind continued to build. We reached off to the NW enjoying an occasional surf on the little waves. We had some distance to beat back and by now there was a solid sea breeze gusting toward 20 knots, so we turned around and sheeted in hard. It was like lighting the afterburners!

Ben and I were sitting on the windward float, Bill was steering from the cockpit. It was gusty so we each had a sheet in hand just in case but Ishtar felt like she was on rails, charging upwind and powering through the gusts without care like no 21 foot daysailer I have ever seen. At times we were pretty close to flying the main hull, probably 80% of the way there, with boat speed probably over 12 kts. From the high position sitting on the windward float it was a thrilling ride and the most fun sail I've had in a long time. 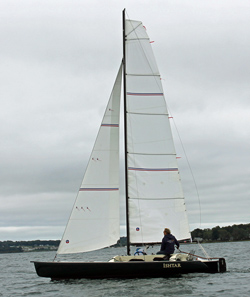 The floats have plenty of buoyancy, which kept the crossbeams out of the wave tops and allows the rig to fully power up the boat. Sail handling is very simple with sheet leads set up to be controlled from any position in the cockpit or out on the windward float deck.

The main hull bow generates far less spray than the original D-20 design which is a great relief. However the combination of high boat speed and waves will eventually cause wave tops to be clipped off and anyone in the cockpit is likely to get more than a little wet. So once there are white caps you'll want decent sailing clothes unless it’s very warm.

Being a “sea trial” we learned a few important things about the rig and have a number of tuning adjustments to make. The next time out will be even better and I promise to work harder at taking video.