“….I love Pata Gao …Most importantly though, my family loves the boat and the adventures that come with it.”

I’m back in Maryland and very happy to see my family again, but other than that; I’m still wondering why I made that last left. I knew the moment we rounded Cape Henry that heading up the (Chesapeake) Bay just wasn’t right. That premonition was validated when less than a mile from my final destination, we were cutting off the lightning rod so we could get under the bridge!!!!!! 6000 miles of sailing and at the end….doink! I 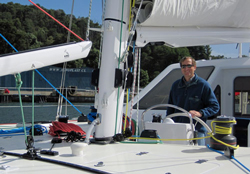 could give you a list of my other mistakes for the benefit of your next customers, but those guys won’t listen either!

In all, it has been a great experience. ….I love Pata Gao and the ocean and I wish I was back out there. Most importantly though, my family loves the boat and the adventures that come with it. They got a good taste of what’s yet to come during our Galapagos Island hopping, the 900 mile passage to Panama and transit thru the canal and they were very sad to leave when the time came to fly out of Panama.

In short, the boat is absolutely incredible. After 6000 miles at sea, I have that peace of mind one gets when you totally trust your boat and equipment and understand its capabilities. I feel safe with my family on board (my limitations will pop up way before the boat’s). The performance and comfort need to be experienced to be believed. I told my friends what to expect on our last leg from Key West to Annapolis but they still told their wives they would be home 3 days later than our actual arrival. They are believers now…

The 2600 mile passage from Valdivia, Chile to the Galapagos Islands was certainly the most exciting…..the uncertainties of a new boat, southern ocean sailing, a significant distance to sail in one hop, (especially for a new boat) and a touch of fear. Nothing seemed difficult after that. We sailed in most conditions except headwinds……seas 15-20’ winds 30 + on the extreme side and everything else less than that. The average conditions were winds of 15 to 20 and seas of 10 to 12. We had SE winds the whole time instead of the customary SW winds which caused a very confused sea state for most of the trip.

The 900 mile passage from the Galapagos to Panama was in some ways the toughest…good conditions for 2 days then no wind then strong winds (up to 30) w/ big seas. We LOVE the pilot house and inside helm. Ann and the kids sailed that part of the trip and loved it.

The performance on the leg from Panama to Key West was similar. We averaged 250 miles a day up to the Western tip of Cuba. After that it was on the nose and the going was slower.
We left Key West on Friday at 0830 and arrived in Annapolis Tuesday at 1500 …..a little over 1000 nautical miles just over 4 days. Conditions were near perfect. I had 2 friends on board who have been sailing various monohulls most of their lives and they couldn’t believe the comfort, stability and performance of Pata Gao. An observation from one of them…..”This was the best sail I have ever had”…his exact words. He’s a professional seaman (Bay pilot) and has been sailing all is life (owns a 43’ monohull).

I still have that scotch and rum on board that you both were so attached to... Until we meet again………
I hope it’s soon….
Take care guys and thanks once again for everything….especially your patience.