Chris White of South Dartmouth, Mass. has done a lot of sailing, cruising, passage-making and even racing, particularly aboard his own unique generation of craft. He is a genuine, if not devout, multihuller, whose dry wit and circumspect outlook belie his enthusiasm for the art and science of design. His career spans more than two decades of designing and living aboard boats. Adept at two and three hulls, the latest feather in his cap is acclaim for Best Cruising Multihull in a 1998 Boat Of The Year competition for his recent Atlantic 42 catamaran.

Of particular interest to this forum is Chris's 1995 undertaking, the Voyager 45 offshore cruising catamaran. It embraces the designer's conviction that sailing performance is a franchise not to be denied, and that sensible, sophisticated accommodations fall well within that envelope. The client for whom the boat was developed, Jim Hunt, is a lifelong sailor with an Olympic gold medal amid his accomplishments. Jim is also a past vice president in charge of operations at Corsair Marine (read, F-27, F-24) and, more recently, a dedicated blue water cruiser whose exploits with his wife Nina aboard the Voyager 45 Whale & The Bird have taken him all over the Pacific Northwest, down the West Coast to Panama, through the canal, into the western Caribbean, across the Gulf, and on up the East Coast to New England. In his own words, "With 12,000 miles of catamaran sailing behind us without any incident or injury we are confirmed cat-addicts."

The vessel that cast this spell over the Hunts is a powerful cat with looks as graceful and as striking as its behavior at sea. The main elements of its design include a tall, 63-foot swept-back fractional rig flying a modern roachy full-batten main; narrow, low-slung hulls with a subtle, satisfying sheer; sufficient overall beam at 23 feet to ensure stability and accommodate a roomy bridge-deck; rounded, low-profile deckhouse sections for reduced windage and good visibility forward from the aft cockpit; and a rigid construction agenda that designates modern materials and advanced building methodology to achieve the strength, stiffness and reduction in structural weight that make the realization of the boat possible.

The Voyager 45 hulls are relatively narrow in section for minimal wetted surface, with fine, crisp entries forward to part seas, then rounded configurations as you move aft for stability and buoyancy. The ratio of length to beam at the water line is greater than 11:1, which indicates good potential for speed and acceleration (most garden-variety production cats tip in at about 8:1). Both hulls sport shallow, nine-foot-long, low-aspect foils to enhance tracking. In the interest of upwind performance, Chris felt it necessary to provide some sort of retractable keel or fin so, cleverly, he has included a single large daggerboard in the starboard hull. Down, it draws almost eight feet and does wonders for the boat's pointing ability; raised and retracted, draft reduces to three feet. And technically it is a model of simplicity: The high-aspect composite foil lives in a daggerwell that runs up and through a small portion of the starboard hull right to the deck.

Of the catamaran's 45 feet, the bridgedeck element extends fore-and-aft almost 25. Bridgedeck clearance is two feet. A good-sized trampoline forward keeps weight and solid deck away from the bows. Aft of that is a section of rigid foredeck, and then wide, stable side decks lead you back to the aft cockpit. The deckhouse itself is a graceful rounded podlike structure that blends flush into the decks port and starboard. A particularly significant advantage of this detail, aside from the aesthetic reward and the reduction in windage, is the ability to build the boat with complete, uncompromised monococque structural integrity. This allows the vessel as a whole to be stiffer and stronger than it would were there a raised cabin-top separated from the deck by a traditional coachroof.

One of the reasons that more than a few designers and builders generate excessively corpulent catamaran hulls has to do with the need for buoyancy. Set up for cruising, manufactured with conventional fiberglass and layup technology, the boats themselves are simply too heavy to sit the way multihulls in a perfect world are supposed to - "like a leaf upon the water." They displace too much, which puts more mass below the waterline, and increases the bane of any performance vessel: wetted surface. 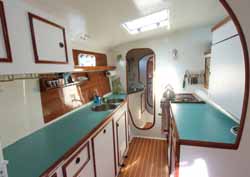 The cockpit features wrap-around U-shaped seating aft at the stern, with wheel-steering mounted on the cabin bulkhead to port. It is a very businesslike part of the boat. There are dinghy davits aft, a double-ended mainsheet system led to winches port and starboard, stoppers and tackle to control daggerboard deployment on the starboard deck, and jib primaries on the cabin-top along with halyards and reefing paraphenalia. There is enough on-deck real estate port and starboard to make leaving the cockpit and moving forward easy; however the slope of the cabin structure as it blends into the deck requires a little getting used to.

Once inside, the main living space occurs in the bridge-deck area. The accommodation plan calls for a navstation to port, a small desk and handy wet locker to starboard, and then forward, in the center nacelle beneath an eyebrow window that follows the contour of the cabin-top, a dinette flanked by settees. The space is open and cheery. The navigation area is especially well established - hardly the tabletop add-on found aboard allegedly more lavish vessels in which the entertainment center takes precedence. 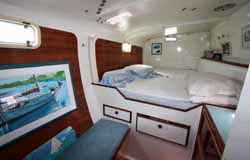 The port hull features a large double-berth, dressing seat and bureau in the aft stateroom, a full working galley stretched fore-and-aft beyond the step-down from the bridge-deck, then a private head and shower, and finally a single berth in the bow. The starboard hull features the same stateroom deal aft, plus the same head, shower and single berth forward. In lieu of a galley amidships, that area is devoted to the daggerboard trunk, a workbench, lockers, cabinets and counterspace.

In general, well appointed storage exists throughout the boat for everything from clothing, to provisions, to tools, to gear and sails. The interior will accommodate six with ease, and it will sleep eight or nine if needed by converting the main settee into another double and energizing an amidships child's berth located on the port side.

In the case of so many cruising catamarans, sheer square-footage tempts you to bring aboard not only everyone you know, but also everything you own short of the Buick in the driveway. The Voyager 45 certainly has room for a lot, but it is apt to shine most brightly offshore if kept within the payload parameters suggested by the lightweight construction ideal pursued by the designer. In his travels aboard Shale & The Bird, Jim Hunt has not skimped on provisioning by any means; he believes in the redundancy of systems and tools, in the comfort of full stores and prescribed personal amenity. However, he has voyaged as a couple with occasional guests, and his appreciation of seagoing performance is of overriding significance.

In fact, his reflections on time spent aboard paint a telling picture of what Chris White's design can accomplish in the proper hands. Sailing in the Pacific Northwest, he realized "all that a performance cruising has to offer: stability (the stove isn't gimbaled and the refrigerator front opening), room to be comfortable inside, speed, maneuverability, and a safe workable platform under arduous conditions...Off the coast of Oregon, 40-knot winds and 15-foot seas gave us 20+ knots of surfing joy...Offshore, we frequently did better than 200 miles a day. And our best day's run (loaded for cruising, mind you) was 245 miles between Belize and the Yucatan..."

Performance and comfort are always at odds in the context of serious ocean voyaging. Chris White's approach to the conflict combines a philosophy of temperance and reserve when it comes to what one should expect in the way of amenity, and dogged enthusiasm when it comes to what one should demand from the materials, technology and design logic available today in the semi-custom marketplace. The Voyager 45 is a marvelous extension of that thinking.